It’s been quite a ride this new year so far! Last time on Brash Librarian, I announced that I was promoted to Circulation Manager! WOOO! However, I also said that might mean less posts until I get my bearings.

As most of the world knows by now, famed singer/actor David Bowie passed away from cancer last week on January 10th. Along with actor Alan Rickman (most famous for Severus Snape from Harry Potter) dying a few days later, I’d say 2016 is the year famous British people die at age 69. Thankfully, Gary Oldman has another decade and Paul McCartney is already 73.

So why do I care about David Bowie? What you probably didn’t know is that Bowie was a big library supporter and avid reader. How big a supporter? Big enough to do reading posters for libraries.

How avid of a reader? Avid enough to have his own top 100 books list. While I won’t list all of them here, I’ll list off a dozen that I found interesting:

During an interview with Vanity Fair in 1998, he discussed his love of books and literature. The best question of the interview in my opinion? 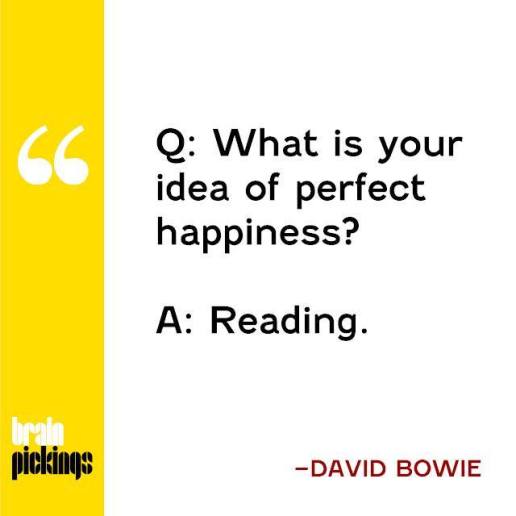 What is your greatest fear?
Converting kilometers to miles.

Which living person do you most admire?
Elvis. (Because Elvis didn’t die, he just went home.)

Who are your heroes in real life?
The consumer.

Which word or phrases do you most overuse?
“Chthonic,” “miasma.”

What is your greatest regret?
That I never wore bellbottoms.

What is your most treasured possession?
A photograph held together by cellophane tape of Little Richard that I bought in 1958, and a pressed and dried chrysanthemum picked on my honeymoon in Kyoto.

And my other favorite…

What is the quality you most like in a man?
The ability to return books.

If that still holds true, Bowie either loves or hates me – depending on how long I’ve kept my current book. (I’m still holding on the Elon Musk biography, I’m so sorry everyone.)

That’s all I have for this week, kids. Don’t forget it’s Thursday, which means some great Throwback Thursday pics will be on my  Facebook, Twitter or Instagram for all to enjoy!